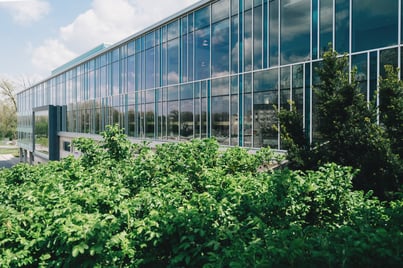 It seems somewhat ridiculous to have to entertain a building modernization program for a building a week old; you can only ignore the truth for so long,  however. Tenants increasingly demand IAQ assurances from building owners and operators because the potential health impact of indoor air pollution represents a non-negotiable. Co-working space operators are far ahead of traditional building owners/operators in recognizing the trend to proactively address any concerns over a Sick Building Syndrome.

Real-Time IAQ Visibility is Necessary But Not Sufficient

It is essential for occupants and building operators to know the real-time status of IAQ conditions. IAQ visibility continues to trend from a nice-to-have feature to a required-to-have feature. Exposure to indoor contaminants will undergo increasing government scrutiny as the measurable health impact implicates occupational safety and health regulations.

For example, the New Jersey IAQ Standard governs existing buildings occupied by public employees during their regular working hours. This IAQ standard is one of the only state regulations in the U.S. As specified in their compliance program, an employer shall designate a person to assure compliance to actions including, “[w]hen the carbon dioxide level exceeds 1,000 parts per million (ppm), the employer shall check to make sure the HVAC system is operating as it should.” The problem, of course, is that very few buildings in New Jersey can actually determine carbon dioxide levels on a continual basis to even determine whether an HVAC system check should be performed.

In another example, California’s Division of Occupational Safety and Health Policy and Procedure Manual specifies in P&P No. C-48 that workplace IAQ can be injurious to the health of building occupant-employees. These policies and procedures mandate that carbon dioxide concentration should be measured “in areas of the indoor air environment, as appropriate, if such areas have been identified through occupant-employee interviews as ‘stuffy,’ ‘close,’ or ‘stifling.’” Surprisingly, PAP No. C-48 has not been updated since August 1, 1994, almost 25 years ago!

Should those policies and procedures receive a long-awaited update, it seems axiomatic that objective real-time IAQ measurements will replace complaint-driven reactive policies. Will real-time IAQ dashboards for occupational safety and health be mandated in the near future?

IAQ Remediation Through Integration With a BAS

Today’s BAS integration efforts are hampered by constraints imposed by wired networking. For IAQ, this would be especially problematic due to the widespread need for IAQ sensors on every floor, and in shared work spaces such as conference rooms. Wireless IoT sensors can solve this IAQ sensing problem.

The next challenge then remains, how does one integrate the real-time IAQ data resident in the cloud with a BAS for HVAC system remediation? In general, the cloud has removed limitations imposed by on-site networking. Traditional integration of an IAQ sensor with a BAS would require a series of network links from the BAS to the IAQ sensor. IoT IAQ sensors break the networking restrictions of this framework. IoT IAQ sensors would connect to an off-site IoT Cloud Core either directly or through an intermediary gateway device. 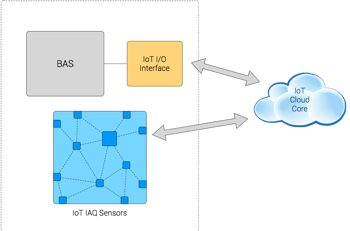 The information delivered to the BAS via the IoT I/O Interface can then represent the control actions determined by the IoT Cloud Core. The BAS would then be tasked to merely execute those HVAC control actions on behalf of the IoT Cloud Core. This type of virtual BAS would represent an increasingly viable alternative to modernizing the BAS infrastructure of aging buildings.

IAQ is driving today’s building modernization trends. IoT not only provides the easiest mechanism to retrofit existing buildings with wireless IAQ sensors, but also provides a cost-effective upgrade path for integration of real-time IAQ sensor data with a building’s BAS.